Wow I hear you utter, she kept that quiet. Surely we would have known if she’d increased her fitness level so dramatically. Well yes, yes you would. Clearly I wasn’t running, I was volunteering.

This 52 new things means I keep saying yes to things then slightly regretting it. I was regretting this one at 5.30am when I dragged myself out of bed, and at 7.15am when I was running down the road because the bus was late. After that point though I didn’t regret it because it was yet another experience I would never have had if I wasn’t being open to new things.

So I, along with some of my lovely work colleagues, was a marshal for the day. I know this because people shouted “Marshal” at me when a runner was being sick under a tree and called “thanks Marshal” as I was whacking my card clacker thing  against my hand in an encouraging manner. I’ve never had a title before – it was quite empowering.

It was freezing cold – at one point it actually hailed. 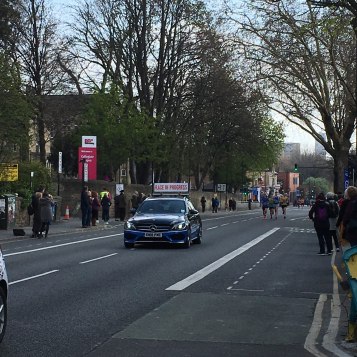 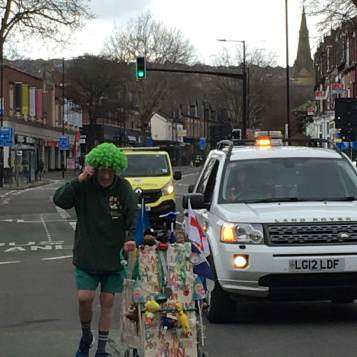 Other than that it was pretty wonderful. The crowd were positive and happy. The runners were brilliant – from super speedy to slow and injured – all so committed. I spotted some friends as they ran past and felt ridiculously proud of them. I felt emotional (as per usual) as I read the reasons people were raising money. In addition to all of that we happy band of volunteers were appreciated – by the people organising the event and by the runners, many of whom actually thanked me for giving up my time while they ran past.

They say people who volunteer are happier people and I can see why. It was a long day standing in the cold but it’s given me a buzz. Even though I did need a nap when I got home.