Harry Potter: A History of Magic

Adoring all things Harry Potter we booked tickets to the History of Magic exhibition at the British Library ludicrously early. So early in fact that my youngest daughter pretty much read the entire series while we were waiting. Surely it couldn’t be worth that much of a wait. 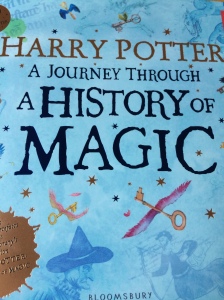 Could the British library design an exhibition that made ancient books and objects and their link to Harry Potter truly magical?

I think they did an amazing job. Each room is themed as a subject that Harry and his friends studied at Hogwarts from Potions to Care of Magical Creatures, and is filled with books and artefacts that link Harry’s world to the beliefs of people in the real world, thousands of years ago.

There are Harry Potter gems in there like the JK Rowling’s synopsis for the first book, her sketches as she realised the world in her head and umpteen beautiful illustrations from the hugely talented Jim Kay. The exhibition shows how her extensive research and knowledge into the history of magic fed into her books. Fascinating artefacts like the Ripley Scroll from 1490 – said to describe how to make the Philosopher’s Stone, and items used to foresee the future, take you back in time, while interactive animation exhibits where you can read your own tarot cards or make a potion keep your eyes on the future.

You can’t take photos which I can understand. I definitely wouldn’t a glimpse before we arrived. I would wholeheartedly recommend the book if you have kids and want to revisit it at home.

The exhibition is on until Wednesday 28th February so catch it while you can. There are also lots of events happening in libraries around the UK – I’m looking forward to an evening all about the chemistry of magical sweets Sheffield Central library next week, so seek out what there is near you.

I’ll leave you with these wise words from JK Rowling: