The best kind of treasure hunt

As you know I’ve waxed lyrical about Endcliffe Playgroup many times before. They were instrumental in preschool fun and chaos as well as helping my daughters to grow up enough to move on. Despite school starting I’m still on the committee and this weekend it was our treasure hunt in the Botanical Gardens. 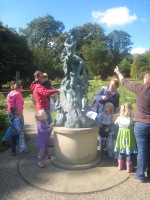 It was the usual simple strokes of genius that little ones love – rushing about following picture clues, chasing pigeons and terrorising squirrels. They collected stuff of course like feathers and sticks and our lovely treasurer ignored the cries of her 7 year old (“you look ridiculous mum”) and dressed up as a pirate. Just a week too late for International Talk Like a Pirate Day. 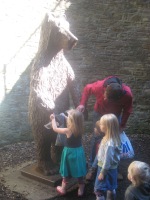 Phoebe loved seeing her friends again, as did I. And the sun even shone.

It made me think once again about why all this stuff is important. This group let me have time off to myself each week. But it also allowed me to be involved in the childcare of my preschoolers. Whether it be as an extra pair of painting hands on playgroup days, raising money for the group or messing about at spin off sports days in the park. 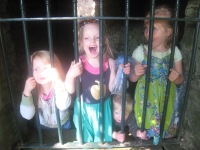 It has a sense of community and friendship for children and adults alike. Phoebe has several little friends she loves to see outside school now, and some of my closest friends were met through playgroup. (They are wonderful even if they are terrible at pub quiz questions).

The structure and routine for my two to four year olds was invaluable to me (and the kids) and at my hardest moments the time away from the girls playgroup gave me for a few hours a week was a godsend. Plus it didn’t cost the earth. 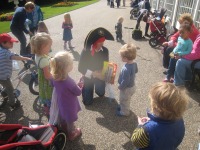 So if you are a Mum or Dad who needs a little time and space to themselves during the week but doesn’t want to commit to whole days in nursery, I urge you to think about Endcliffe Playgroup in Sheffield. The Playgroup would love some new 2-4 year olds to join the lovely children who go every week, and I know there are parents out there for whom this would absolutely fit.

This isn’t about signing up, this is about joining in! 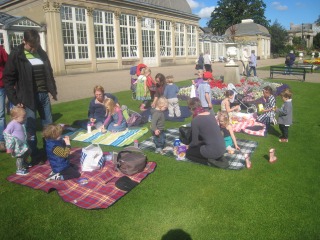