This one could have been called “going to a gala dinner” or “drinking prosecco next to a woolly rhinoceros” – as you do on a Friday night.

I feel like I’ve had all my competition luck in one week with this one because I won to go to the event, won a gin and jam hamper and then also won afternoon tea in a raffle – (which is an extra win because I can’t remember ever having afternoon tea before so maybe that will be week 18 or something.)

This was a gala dinner to fund-raise for Museums Sheffield on the theme of icons, run by students on event marketing courses at Sheffield Hallam. I had seen it referenced on Facebook by a vintage shop I follow and almost volunteered to dress up as an overweight Katherine Hepburn to be a hostess for the night but wasn’t brave enough and so  entered the competition instead.

There was a slight issue when I won the tickets originally as it said “cocktail attire” which ruled out taking my husband with me as he doesn’t own a suit let alone a tuxedo. My friend put frocks and heels on and hoped for the best.

The venue of Weston Park of co 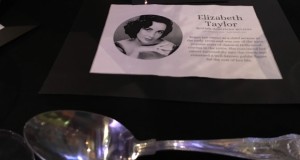 urse was a beautiful one – we even got to go in through the doors that I didn’t even know opened (little things make me happy). The evening consisted of drinks next to the exhibits, a three course meal under paintings, two girls dancing the Charleston, a guitarist singing classic covers, a bar in front of a polar bear, a rather good decade busting soundtrack and a raffle. 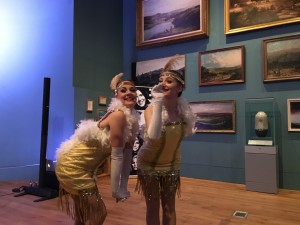 Apart from the rhinoceros, the most interesting thing was sitting on a table with lecturers and students from the event marketing courses at Sheffield Hallam and hearing about all the ways they were putting on events as part of their final degree – of which this was one. It’s a far cry from what I did to complete my degree twenty years ago but then no-one would have attended an event about the use of media in local politics.

It was a lovely night and the students did  very well in arranging and delivering the event.

Once again I grabbed an opportunity to go out with a lovely friend and do something different. We had chance to catch up, eat good food and enjoy the museum at night, plus I got a couple more options for things to do this year into the bargain. This challenge is now clearly about friendship, stepping outside comfort zones and living life. Lovely.