When I was a child I collected the usual stuff – badges (which I stupidly sold in a car boot in the 1990s and included such gems as Wimpy Homes and the muppets at Selfridges) and rubbers. Not that I ever had anywhere near as many as my friend Chloe whose collection was vast and smelled exotic.

My youngest daughter collects badges and rubbers after a fashion and mostly because Father Christmas keeps giving them to her. This is where the usual collections stop. 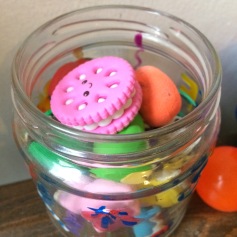 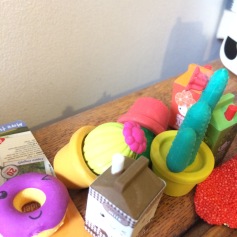 Her main fascination remains bugs, specifically millipedes. She’s had a tank of woodlice in her bedroom, a giant millipede who unfortunately died of cold and a series of other millipedes of varying sizes. Today three new millipedes arrived and the excitement level was ridiculous. Apparently they are called Rocket, Sky and Ocean. I hope she stops spending her money on millipedes now (otherwise we’ll have to get a bigger tank), but I also hope she never loses her love for invertebrates which is a phrase I didn’t imagine writing.

T is 11 and collects all things Harry Potter (which of course isn’t that odd). But in addition she has now decided to collect as many of the elements as she can. I blame ‘Itch’ by Simon Mayo a little, but she’s had a fascination in the periodic table for a while. She bought a book on it. It’s a good thing that being a geek is cool as she is throwing her hat firmly in the geek ring.

So when other children are heading down the toy shop, T has been on Ebay buying any elements she can afford that aren’t radioactive. As a consequence my Facebook timeline keeps trying to sell me titanium.

Another current enthusiasm is survival. Last week she went sales shopping looking all set for getting lost in the wilderness. For Christmas she actually asked for rope. I wouldn’t change my fascinating wonderful girls for the world.

Me? What do I collect? Well I have a love for old advertising and quirky kitchen paraphernalia (especially Homepride men). But mostly I’m trying to collect moments of calm. It’s not going too well.