Well that was a mad weekend.

On Saturday night we were VIPs. Well I think the term VIP was a stretch but we did have dinner and wine at City Hall and really good seats. One definite additional bonus was that it meant we got to leave the house at 5.30 and had the night off from the bedtime routine. Plus it was a win win because the babysitter really enjoyed the 1980s film of Swallows and Amazons apparently.

So while they were enjoying up to date cinematic experiences I was trying to convince our waitress that she wanted to ask ElvisCostello to sign my 1978 copy of “Radio Radio”. She tried bless her, but failed. We were clearly not VIPS. She also told us that when Peter Andre played City Hall he found his own way to the VIP room and hugged people. We didn’t entirely know how to respond.

Anyway the show started and we had fantastic circle seats with an amazing view. Of course it transpired that had we been in the stalls he might have a) danced with me b) sat on my knee or c) invited me to spin the wheel to choose a song and dance in a go go cage…. Okay, probably best to be in the circle then.

The first couple to be invited to spin the wheel were called Molly and Michael, which seemed odd since the girls had named two of our brand new fish those names just that morning. Jackson and Thistle obviously weren’t Elvis fans.

So the format was basically that Elvis Costello and The Imposters were on stage with a twenty foot tall spinning song selector, a bar for audience members to view from and a Go Go cage where some choosers were encouraged to dance, for in most cases just a little too long for their collection of dance moves. Some of those selected from the audience were slightly obsessed fans from Brighton, some were daughter father combinations that made me smile (and occasionally cringe) and one lady was clearly pregnant. They didn’t make her dance in the go go cage for which I suspect she was truly grateful.

It was brilliant. One of those gigs where the words pop into your mouth despite you not having voiced them for twenty years. I particularly loved “She”, “Red Shoes”, “Watching The Detectives” – there were so many and he was a true showman. Very funny and energetic – well he needed to be since his set was nearly three hours long.

Then afterwards I did something I have never done before in my life. I went and stood at the stage door. Which showed dedication since I’s been wearing heels for six hours.

I think partly I stood there because I’d met Billy Bragg already and I thought I couldn’t miss the opportunity to meet another of my teenage icons. Also I had consumed quite a lot of free VIP wine and had a single in my handbag. And a very understanding husband.

So we waited and queued. After a while Elvis appeared and various people pushed in front of me. They also pushed in front of the disabled man in a wheelchair so I didn’t take it personally. Once I appeared to be roughly near the front I plucked up enough courage and asked if he would sign my single and he did. I daren’t ask for a hug or a photo so I didn’t get one, but he was a gent. Although Billy hugged me without me even asking. Just saying..

It was an amazing night and it really felt like I had watched and, very briefly met, a star. The tickets also happened to be one of the most thoughtful gifts I have ever been given by my lovely husband. So all round,pretty terrific. 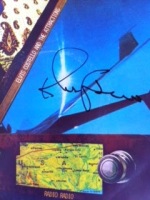