You’re hopefully getting the gist by now that Amsterdam is ridiculously easy to navigate with children. This, and my determination that the girls would understand a bit of social history of the country we’d come to, led us to go on a day trip.

Wednesday was cold. Bitterly cold. The ideal day to go and stand in flat unsheltered countryside and climb up windmills. But what else did we expect in February?
The train takes you straight to Zaanse Schans in about twenty minutes and is a little bit kitsch I must admit but there is nothing wrong in that. Think Holland and it was there. Clogs, cheese, Dutch rural life  and windmills. Quite a lot of windmills.
In the clog making shop I managed to resist the temptation to buy the girls cow print clogs. They were 33 euros a pair so it didn’t take long to come to the decision. Shame though. 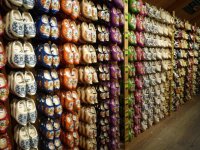 In Zaanse Schans museum we started with cake. It was explained to me that I could have luxury cake containing raisins, sugar and fennel. I managed to cover up my horror at the idea of fennel cake and bought it anyway. Which was fortunate because she meant cinnamon. I can’t criticise though since I can only say yes and no in Dutch. And “Help” because it’s “Help”.
The museum was lovely, if somewhat difficult to explain.

After that we went through the cheese making shop and the girls said loudly “ugh smelly”. I bustled them out. We didn’t want any gouda anyway. 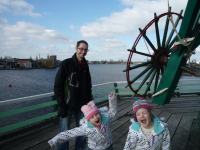 Then the windmills. We went in an oil windmill up extremely steep ladders to the top which had very little barrier around it. It was hair raising on a windy day but somewhat liberating coming from a country where there are five foot railings at the top of everything slightly high in case you feel the urge to leap off. Then we visited a reconstructed saw mill. You can’t say we weren’t giving the kids the full Netherlands experience.
I should at this point explain that Paul and I grew up in South Holland in Lincolnshire. I could see the connection obviously: very flat, very wet land that had to be drained, lots of tulips in Spring (not that that can be said of Spalding now whose flower parade now features quite a lot of cabbages). But it was vastly different. Zaanse Schans was flat AND picturesque. Which I wouldn’t say of the fens. It was probably the windmills that helped. I’ll be kind and say they both have a “lot of sky” which is the romantic description of my childhood county.

We had extortionate pancakes for lunch that were lovely and so huge we couldn’t finish them. Paul drank Heineken. We were embracing the Netherlands whole heartedly.
The girls entertained themselves by making up incomprehensible versions of Rock, Paper, Scissors on the train and bemusing most of the passengers.
We had promised Tilly if there was time when we got back we’d go to the Van Gogh Museum. So we tore across the city on the tram to find it was shut and the exhibition had moved to the Hermitage. Right near our hotel. Cheers for that. A few posters near our hotel would have been helpful.
More tearing about and we made it.
I can honestly say I was quite affected by seeing several of the paintings. Specifically The Bedroom, and Sunflowers of course. But also those he painted on both sides of the canvas when he had no money.
It turns out Phoebe (4) knows quite a lot about Van Gogh. “He’s the man who always wears a hat isn’t he?”. Apparently she painted the Bedroom at school. It’s important that they learn about Post-Impressionism in reception.
Tilly was marginally disappointed that Starry Night wasn’t there so we’ll have to go and find that in New York. She also asked if he did any paintings after he chopped his ear off. Turns out he did but I don’t expect they were very cheerful.
The shop is full of his images on everything you can think of. It’s a bit unnerving. And hideously expensive.
Back at the hotel the girls did sticker books while we had shots of Nescafe and longed for Yorkshire tea.
Typically in second to last evening we discovered the perfect restaurant for the week – Vapianos. On entry you are given a card then you go to each counter, choose the pasta and the sauce you want (or pizza) and they cook it in front of you. You hand over the card and they add what you’ve ordered to it and you pay on leaving. It’s comparatively cheap, fast and tasty. Once you work out what the hell you are supposed to be doing.
Always keen for movie repetition the girls watched Cloudy again and Paul and I hoped against hope that everyone slept well  and no impromptu Irish gigs had been arranged. We needed have worried. We were all so exhausted it wouldn’t have mattered.