There was a TV opposite the beds and the girls insisted on watching it before doing anything else on Monday morning. A good thirty minutes was spent with them watching a cartoon entirely in Dutch on Nickelodeon.

“We don’t” came the reply. They still got cross when I turned it off.

Our “hotel” doesn’t do breakfast and since we didn’t know what we were doing we went in search of some and ended up in a patisserie. My kids thought they had died and gone to heaven. Cake for breakfast is up there with build a bear workshops and jelly babies.

It was at the patisserie that Paul and I discovered it is not sensible to ask for a cup of tea in Amsterdam. They don’t put milk in it, it tastes weird and all hot drinks come in a handleless glass. Very odd. Nice cake though. 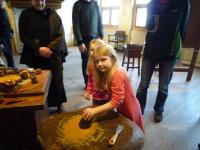 We walked to Rembrants house afterwards which we hadn’t intended to see but it was a place to buy an IAmsterdam card and actually it was great. This was where Rembrandt lived for most of his life, although all the contents are replicas since he went bankrupt. We saw how he made etchings and how his assistants made paint. The girls did English work books and got involved as usual. It’s to be recommended. Then we went to the toilet and I couldn’t work the taps – which Phoebe announced to everyone in hearing distance on our exit. English fools.

We went on foot to find a cafe for lunch.

People will tell you that Amsterdam is a great place to go with children because the lack of cars makes it so safe. I beg to differ. Bicycles are lethal. I had a near miss with one as I tried to walk around a man who was pulling a pallet of something heavy. It was apparent that the cyclist’s grasp of English, like every else in Amsterdam, was excellent. He said loudly “Oh for goodness sake”. I suspect he also knew plenty of expletives but chose not to use them. I thank him for that.

We went to a cafe recommended in our guidebook (I do like to plan). It was a bit of an error as they were somewhat superior in their tone and extremely expensive. Plus Tilly ended up with chocolate sprinkles on French stick. She was overjoyed. I was wondering how much apple juice could actually count as all of her five a day. 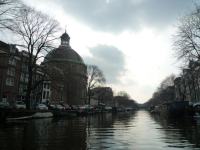 In the afternoon we joined a canal tour. Despite the fact that the kids couldn’t decide whether to sit indoors and overheat, or outdoors and freeze after twenty minutes, we all had a great time. The canals are a must if you’re visiting but you have to sit inside if you want to learn anything. As a result I know very little but I have lots of photos.

After that we ended up near Vondelpark which would have been lovely in the Spring but was frankly freezing in Feburary. We flew a pocket kite (ever prepared) and avoided getting run over by bicycles. We then went to the Kinderkook kafe.

I swear this is a brilliant business idea: a cafe entirely for kids. You select a recipe from the cards on display and take a plate from the fridge and all the items and utensils the recipe indicates. I must have been tired or something, or maybe there was some instruction lacking, but it was not a seamless operation. We found most of the ingredients but not all the utensils. This led to me borrowing some squirty oil from a table opposite and smearing it onto the baking tray with my hands. Nice.

When Tilly had cut her biscuit shapes out we took them to the kitchen and they cooked them for her. Meanwhile Phoebe had decorated a cake with more sweets. We wondered when the kids would come down off the ceiling.

So the girls were happy. I was harassed and needed a hot drink. The cafe is bizarre. You simply help yourself to everything, which would be ok if the written instructions weren’t entirely in Dutch. Or if being English didn’t render you incapable of dealing with such freedom. I felt like I was stealing.

I located the coffee machine and stood looking troubled for a few minutes. No-one came to help (they were probably too busy chuckling into their hands) so I pressed what I thought was the cappuccino button.  Half a cup of warm milk filled my handleless glass. I tried pressing what I thought was the coffee button. Nothing happened. I gave up and moved onto Paul’s. He  had bravely asked for tea so I pressed the hot water button and threw in a dubious looking tea bag. No milk was available so I poured in my cappucino froth. He didn’t say it was very nice.

After a while I was so desperate for a drink that I went to ask for assistance and it transpired the machine was out of coffee. I felt like a bit of a numpty.

We took the tram back and then walked the last bit past a beautiful cinema that I would have loved to go to. Amsterdam were welcoming “Richard Gere” and putting out the red carpet. He wasn’t staying in our annexe funnily enough.

At dinner time we found an Italian restaurant where the mix of Italian, Dutch and English both verbally and written on menus was a challenge but they did pizza and wine so everything was fine. The kids were pretty well behaved, but Phoebe was decidedly tired and kept throwing herself at me kissing me. We left fairly quickly at the end and as we gathered our things the man at the next table smiled and said we had “put on quite a show”. I’m sure he didn’t mean that. Maybe he just needs to work on his colloquialisms.

To bed and a night without Irish music had us sleeping like babies. So far so good.